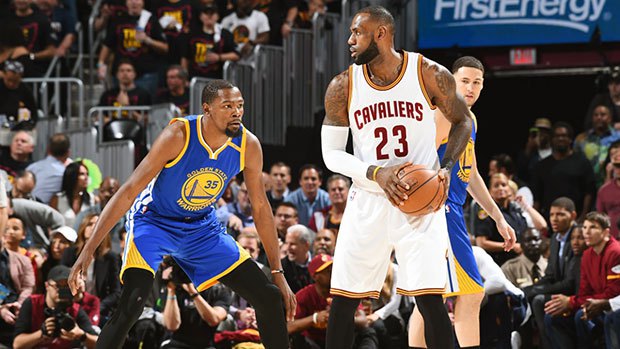 We all knew it was coming, and it’s here now. The Cleveland Cavaliers and the Golden State Warriors are going to square off for the 3rd consecutive NBA Finals. For the first time in league history we’ll have a trilogy. There are no shortage of themes and storylines going into this battle. 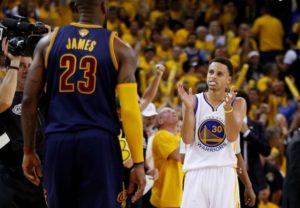 In July 2014 LeBron James returned to Cleveland and in his first season back he led the Cavaliers to the 2015 NBA Finals. They went up against the Golden State Warriors. The Cavaliers had a depleted roster in this series. Kevin Love suffered a shoulder injury in the first round against the Celtics courtesy of Kelly Olynyk. Kyrie Irving was battling a leg injury during the playoffs and was officially ruled out for the finals after game 1.

To compensate, LeBron James played at a Herculean level averaging 35.8 points, 13.3 rebounds and 8.8 assists, and led both teams in all three categories. The Cavaliers had a 2-1 series lead and it seemed James could pull off the upset. However, the Warriors proved to be the deeper, and better team. The Warriors won the series in 6 games, and the Finals MVP award went to Andre Iguodala.

This placed an immediate asterisk on the Warriors title. Kevin Love and Kyrie Irving were out for the Finals, which made it easier for the Warriors. 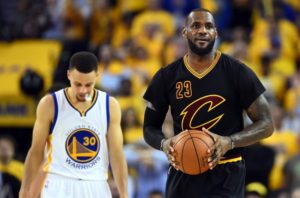 The Cavaliers-Warriors immediately became a fan-favorite and the world was hoping for a rematch. The Warriors made history that season going 73-9 and Stephen Curry became the first player to be named the unanimous MVP. The Cavaliers made it through the East and this time had a healthy Kyrie and Love. For the second time, they met in the finals. The Warriors jumped to a 3-1 series lead and seemed ready to close them out.

LeBron James and the Cavaliers had something different in mind. The Cavaliers Big Three of James, Irving and Love played up to their name. LeBron and Kyrie in a game both scored 41 points, LeBron had back-to-back 41 point games. Draymond Green in typical fashion, took an unnecessary swing at LeBron’s groin which led to a one game suspension. The Cavaliers managed to tie the series and force a game 7. It was a tightly contested game that came down to the wire.

LeBron James made a key block on Iguodala, and Kyrie Irving hit the shot seen around the world that gave the Cavaliers the lead. James sealed the game at the free throw line and the Cavaliers became the 2016 NBA World Champions. LeBron once again led both teams in all statistical categories and won Finals MVP. It was the first time in Finals history a team came back from a 3-1 deficit to win the championship. LeBron also delivered a championship to Cleveland, a city that experienced a 52-year drought.

Naturally, there are people who question the Cavaliers championship. They’ll be quick to point out that Draymonds suspension gave the Cavaliers an advantage. 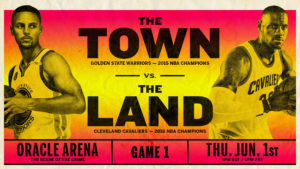 After the past two NBA Finals, the world anticipated the rubber band match between these basketball powerhouses. Kevin Durant left Oklahoma City Thunder to join the Warriors, meanwhile the Cavaliers added Kyle Korver and Deron Williams to bolster their bench.  This series has so much significance. Seven of the past eight MVP’s are playing in this series (LeBron, Curry and Durant). It’s the first time two teams will meet for three consecutive Finals. LeBron James is playing in his seventh consecutive NBA Finals, and 8th overall. The Warriors went 12-0 in the playoffs going into the finals, the best record in NBA history. Both teams combined are 24-1. They are unquestionably the most dominant teams in their respective conferences.

With both teams 1-1 in the Finals against each other, this could be the series that determines who’s the better team. Both teams are healthy and have ample rest going into it. The Cavaliers, the defending champions, are heavy underdogs going into this series, largely because of the Warriors adding Kevin Durant to their already loaded roster.

Like Ali-Frazier, this Cavaliers-Warriors trilogy has the potential to be one of the most talked about sports rivalries in history. Earlier in the season, Draymond Green said:

“If Cleveland comes out of the East, I want to destroy Cleveland. No ifs, ands or buts about it. If and when we get to that point, I want to annihilate them.”

Kevin Love had a response, saying:

“He wanted us and he has us starting next Thursday.”

The world wanted this, and we got it. Let the games begin.

History of the New York Knicks and Melo Drama