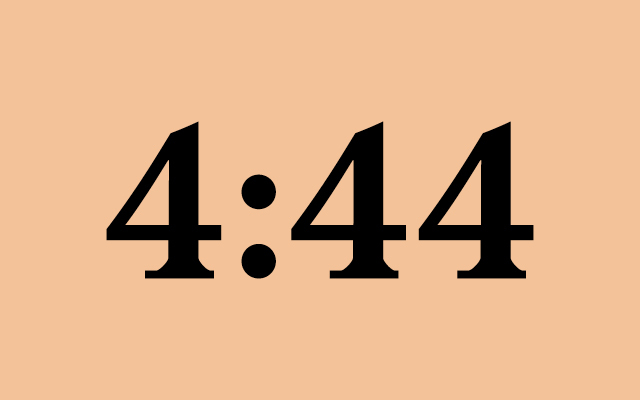 It’s been over a week since JAY-Z released his 13th studio album 4:44. If you have TIDAL, or are on Sprint’s network, or even downloaded the album online then you got to listen to it on June 30th. However, if you waited until it came to Apple Music (like I did) then you had the weekend to listen to it. These are my early impression of JAY-Z’s 4:44 album.

No I.D. produced 4:44 in its entirety. Their chemistry is undeniable and the end result is a cohesive 10-song, 36 minutes album. However, his role goes beyond just being behind the keyboard. In an article with Rolling Stone (which you can read here), he discusses the inspiration behind 4:44 and how they collaborated to make this album feel personal and real.  They worked intricately in order to craft this album. From the ideas, to the creative process, the samples used, and the actual recording of this album was incredible. It makes sense why No I.D. was the sole producer on this album and it was for the better.

JAY-Z and success are synonymous. It’s the result of him putting out quality music. Not to mention his savvy business ventures and his well-publicized marriage to Beyoncé. In a career that spans over 20 years and over hundreds of millions albums sold, how do you create music that’s new and refreshing? He solved this problem by going personal.

JAY-Z delved into topics and content that no one expected of him. He peeled back the curtains on what appeared to be the perfect life. He openly discusses his marital problems, insecurities, and provides advice to a younger generation on how to create financial freedom. Not to mention he candidly discusses his mothers sexual orientation. JAY-Z’s 4:44 is a significant departure from his last musical offering Magna Carta Holy Grail. He goes from bragging about wearing Tom Ford to confessing his sins of adultery and from having a better beach to buying back the block. JAY-Z has long been known for his ability to rebrand himself and 4:44 is further proof of this ability that seems to be second nature for him at this point.

“And you know better, n—a, I know you do/ But you gotta do better, boy, you owe it to Blue/ You had no father, you had the armor/ But you got a daughter, gotta get softer”

“I don’t even know what you woulda done/ In the future, other n—-s playing football with your son/ You would’ve lost it”

“Mama had four kids but she’s a lesbian/ Had to pretend so long that she’s a thespian/ Had to hide in the closet, so she medicate/ Society shame and the pain was too much to take/ Cried tears of joy when you fell in love/ Don’t matter to me if it’s a him or her/ I just wanna see you smile through the hate”

“I wasn’t ready so I apologize/ I’ve seen the innocence leave your eyes/ I still mourn this death, I apologize for all the stillborns/ ‘Cause I wasn’t present, your body wouldn’t accept it”

While many are quick to label this album as a direct response to Beyoncé’s Lemonade, it would be a disservice to do so. It’s more than that. It’s JAY-Z revealing himself as a person, going beyond his image as an artist or public figure. He’s stepping outside of the comfort of his success and opening himself up in a way fans aren’t accustomed to. We’re living in a time where race relations dominate the headlines. Both him and his wife have been vocal as of late in terms of black empowerment and this album definitely has elements of that message in it. It’s more than just a confessional album, it is informational as well.

It’s the reasons that make the album great, that I fear will make the album under appreciated. We all seen the video of 50 Cent labelling it as “golf course music.” While 50 was being playful as he usually is, he spoke some truth when he said fans are more interested in partying and having fun. While this is a good album and has met rave reviews, there will be a portion of hip-hop fans who will find this album underwhelming.

Case in point, the Lakers newest point guard Lonzo Ball. He blatantly called 21 Savage’s album better. This is what 50 Cent was really alluding to.

Overall, this isn’t the best album made by JAY-Z by any stretch, nor is it his most conceptual. However, it’s certainly his most introspective and arguably the most vulnerable we’ve heard him in quite some time. For that, it must commended.

The Best and Worst Moments of the NBA Awards