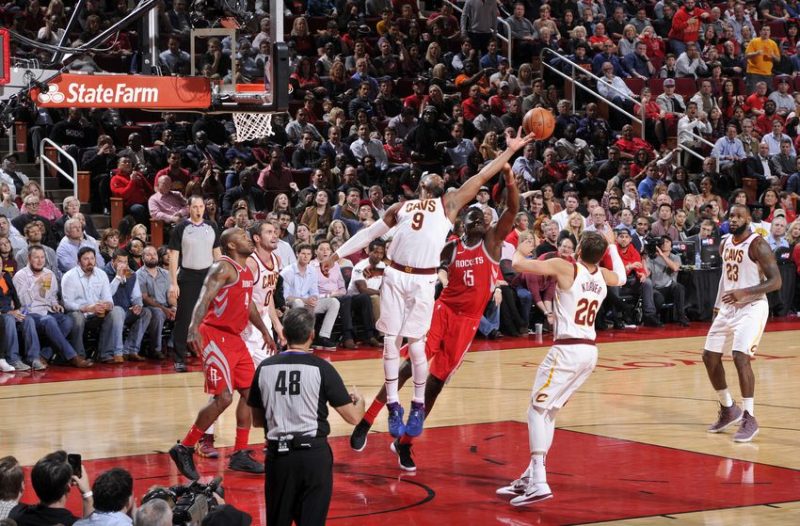 The Beard Versus The King.

On this night, James Harden and the Rockets bested LeBron James and the Cavaliers in a closely contested game. 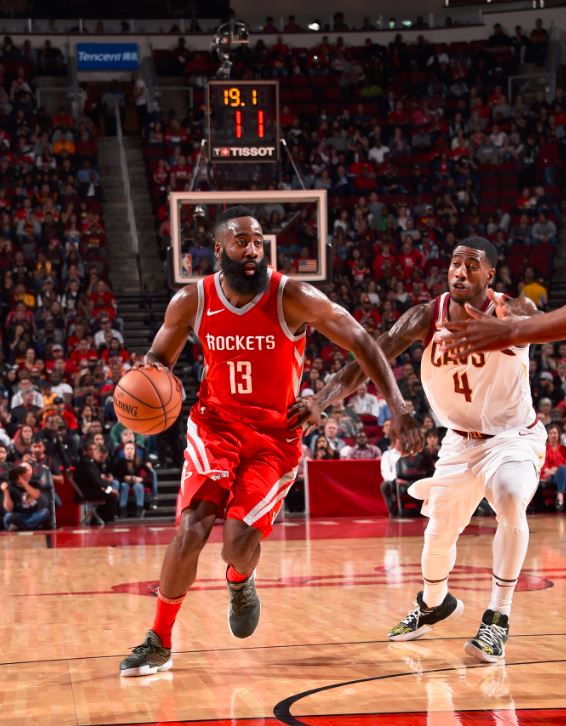 Trevor Ariza of the Houston Rockets started off the game with a three-pointer, and Kevin Love came back with a three of his own. That opening sequence set the stage on what the game would be like: a back-and-forth game.

The Rockets started out the first quarter slow, going 4-14 from three point range. However, turnovers hurt the Cavaliers and they were down 11 points (36-25) at the end of the first quarter. Speaking of hurt, the Cavaliers suffered a scare when LeBron James rolled his ankle on Ariza’s foot. This was the same ankle that kept James sidelined through much of the preseason. Luckily, it was minor and LeBron stayed in the game.

In the 2nd quarter the Cavaliers picked things up and showed glimpses of what they’re capable of. They reduced the gap by outscoring the Rockets 42-27, and went into the half with a 2-point lead (67-65). Jeff Green was the hero for the Cavaliers scoring 20 points. LeBron was his usual self, scoring 22 points, going 10 for 13. Harden had 17 points for the Rockets.

In the third quarter, the Rockets came out aggressive, going on a 7-0 run to start things off. Harden scored 15 points in the 3rd quarter alone and had a double-double with 10 assists. Turnovers and foul trouble plagued the Cavaliers. The Rockets closed the quarter out with a 100-93 lead.

In the 4th quarter, both teams were playing aggressively. The first three quarters were chippy, and it was no different in the fourth. The game was quickly getting out of hand, but LeBron checked in at the 4:45 mark and sparked a comeback. However, it wasn’t enough. The Rockets gave a balanced attack, with Clint Capela scoring some key baskets to close the game, and PJ Tucker providing some offensive rebounding. LeBron James attempted a late game layup to keep his team alive, but Capela blocked that and ended the Cavaliers hopes.

This game was significant for both teams. The Rockets after winning this game, tied the Warriors for the best record in the Western Conference. Meanwhile, the Cleveland Cavaliers fell to 5-7 and lost 6 of their last 8 games.

The Cavaliers are having a slow start to their season, and aren’t looking like the dominant team many (including myself) predicted them to be. During last night’s game, the turnovers, foul trouble, the Rockets offensive rebounding, and their defensive lapses all contributed to the Cavaliers loss. However, look closely and this has been a reoccurring theme. Although it’s early in the season, this is still cause for concern. LeBron is playing amazing basketball, but in his 15th season he shouldn’t be responsible for carrying the load. The Cavaliers need to figure it out, and figure it out fast. As it stands now, they’re not even in the playoffs. Obviously this will change come April, but something needs to be done soon if they hope to win another championship.

The Houston Rockets showed how well-rounded of a team they are. Harden had a triple-double, meanwhile P.J. Tucker, Capela, Ariza and Nene stepped up to get a victory. With Chris Paul sidelined, they still managed to tie the Warriors for the best record in the Western Conference. They’re lethal from 3-point range, but also have an inside game as well. The Rockets just may have the pieces to challenge the Warriors for Western Conference supremacy.

This was a good game that featured two teams from opposing conferences.

The Beard beat The King, at least for now. Until next time.

It's Time to Worry About the Cleveland Cavaliers