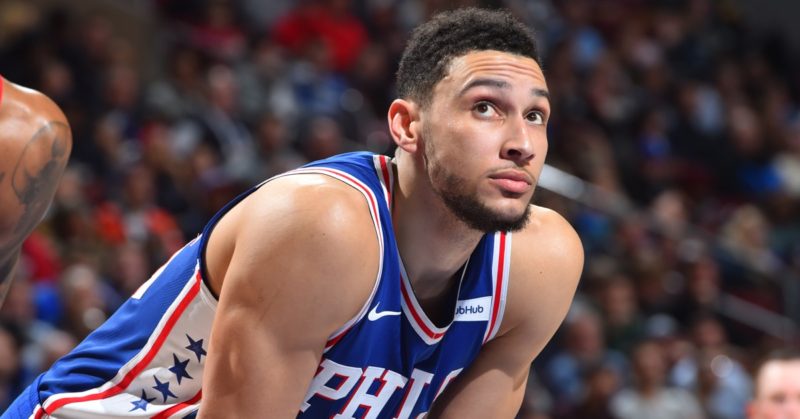 Ben Simmons, rookie for the Philadelphia 76ers, has struggled throughout this series against the Boston Celtics. They’re lost the series in 5 games and the Celtics advanced to the Eastern Conference Finals.

Despite the Sixers overachieving this season, they’ve become a victim of their own success (namely Ben Simmons). Commentators such as Stephen A Smith picked them to reach the NBA Finals this year.

Former Sixer and NBA Legend Allen Iverson picked them to win a championship this season.

We were told to trust the process and then we became believers. Why not? We had great reasons to. Ben Simmons is the favorite for Rookie of the Year. Joel Embid has become an All-Star and is one of the most dominant big men in the game today. They’re a well-coached team. They won over 50 games and finished with the 3rd seed in the Eastern Conference. They were growing right before our very eyes. Then in the first round of the playoffs the Sixers dismantled the Heat in 5 games.

Why the Change of Heart?

The Sixers were playing against the depleted Boston Celtics. Many thought the Sixers would steamroll through them, but that clearly isn’t the case. The Celtics have done an effective job at pressuring Simmons and making it difficult for him to get in the paint. In game 2, the Celtics held him to a mere point that he received at the free throw line. They just looked like they were the better team in this series.

Suddenly, Ben Simmons leadership and playing style is in question. His lack of a jumpshot and his struggles at the free throw line are a point of criticism. But, who cares?

We’ve known since his days at LSU he wasn’t a great, or hell, even a mediocre shooter, but that doesn’t take away from everything else he’s done. He’s already shown that he’s a transcendent player. From his passing ability, to his IQ, confidence and he possesses the poise of a veteran. Players like Ben Simmons don’t come too often, so why is the media and fans alike being so tough on him?

He’s Only a Rookie

The Philadelphia Inquirer wrote an article where they described him as “reckless” and “overconfident”.  That’s just ridiculous. The guy’s a rookie (despite what Donovan Mitchell thinks) and he’s exceeded expectations.

At the beginning of the season no one predicted the Sixers to be in the position they’re in today. Everyone thought they’d be bottom feeders and the process would have to be trusted for another season. Instead he led this team to a successful season and that has to count for something. The criticism of his personality or his struggles against the Celtics are idiotic. As Uncle Ben said (pun intended) “With great power comes great responsibility.” But seriously, we should be amazed by what we’ve seen from him, not critiquing him. Maybe one day we could when he’s a veteran, but now’s certainly not the time.

Here's Why You Shouldn't Compare Kevin Durant's Decision to LeBrons

This post could not be written any better! This post reminds me how much people dont understand ball. They just fall for the hype and what people say. Me and my friends always debate about Ben Simmons being overrated. so what if he had a bad series? HES A ROOKIE!!!

the author is selective with his information. lets talk about how he can’t shoot if his life depended on it or the careless passes he made this series. what about him choking the entire series. he cant act all cocky when their winning and then play the rookie card when they lose sorry not buying that.

It’s my first visit to this site. This piece of writing is in fact fruitful
for me. Keep up posting these types of content.